Cameras to be used to police Jetski Hoon hot spots. 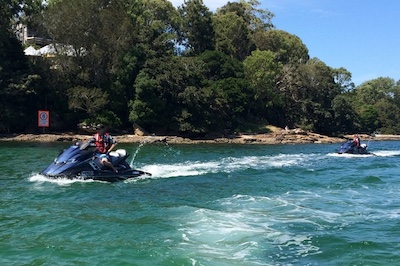 As the 2016/17 boating season is about to start,  all the jet ski riders that have been hibernating over winter are heading out onto the water to have a good time.

But if you plan to behave in an antisocial manner, be aware that  new legislation passed in NSW this past July has given Authorities the ability to place cameras on known trouble spots to monitor and police bad behaviour by jet ski riders.

Minister for Roads, Maritime and Freight, Duncan Gay has said   “This will initially be introduced on the Georges River and in Port Hacking and Botany Bay. An evaluation will be completed at the end of the 2016-17 boating season before any other declared areas are considered. It is envisaged that a mix of fixed and temporary cameras could be located on land or water, including vessels, and used to target hot spot on-water enforcement locations identified by police and RMS. The use of existing community safety closed-circuit television infrastructure will be explored where feasible.”

“Cameras will be used only in declared areas which have had a history of non-compliance with marine legislation and will not be deployed across the State’s waterways to catch people out for minor offences. This scheme will supplement, rather than replace, police and boating safety officer patrols”

Full details of the new legislation can be found here

After the rising number of incidents last season, this is a positive move to ensure more people can enjoy a trouble free day on the water, and the small element of troublemakers will eventually be caught and held responsible for their actions.

Smile for the camera!

If you would like to hear more safety tips from Excite Safety Training or find out how you can undertake further training, Sign up to our newsletter below, like us on facebook or contact us via enquiries@excitesafety.com.au ,
FIRST AID AND RELATED COURSES
BOAT OR PWC (JETSKI) TRAINING
WHS  COURSES